The Sailmaker provides information on the basics of fluid mechanics

In order to better understand how the sails of a sailing ship work, we will look at some important basics of fluid mechanics. Simplified, a sailing boat consists of four elements: sail, hull, keel and rudder. Each element in itself is a hydrofoil.

The interaction of the forces generated by the wing effect describes the sailing behaviour. The keel and rudder are in the water, the sail in the air, the hull in both media. Differences and similarities of Sails, air and water form the basis.

To avoid getting lost in details that have a negligible influence on the overall effect, assumptions are made that lead to a clear theory. The theory of Sails – Ideal Liquids, for example, assumes that air is incompressible. The resulting error is less than 1 percent up to a speed of 100 knots – an acceptable value.

The two decisive forces on the sail, buoyancy and resistance. We first look at the theory of potential flow on the sail in order to develop the essential basics for further understanding.

One of the most important equations for the understanding of aero- and hydrodynamics on a sail – is the Bernoulli equation. It relates the speed and pressure of a fluid to each other.

The Sailmaker informs about sails and wings in air and water

Ideally a sailing boat consists of a sail, hull, keel and rudder. The essential forces of these four elements are generated by the wing effect. At first glance, the sail can also be recognized as an airfoil. Especially the new sail materials make a modern sail look exactly like an airfoil. However, the hull with the keel also behaves like an airfoil, whose transverse force counteracts the lateral force generated by the sail. And the rudder is also nothing more than a movable wing. The ship is steered by the buoyancy forces of the rudder. There are essentially two forces acting on an airfoil: drag and lift. The lift is also called lateral force. Depending on the angle of attack of the airfoil, the lift force is much stronger than the drag. This is essentially the reason why an aircraft flies and a sailboat can sail on the wind.
The mode of action of a sail is thus comparable to that of an airfoil. Therefore, findings from the theory of aircraft wings are applied to the sail, keel and rudder. This is possible without major errors, since water behaves like air at relatively low speeds. Two things only have to be considered: Firstly, there are other numerical values for density, toughness and similar quantities, and secondly, in the case of the fuselage, the factor of the characteristic impedance is added. However, when the hull is deeply submerged and the keel and rudder are attached to it, water behaves in exactly the same way as air. Therefore we will regard air and water as components of the same species, namely liquids.

Sails in ideal fluid and two-dimensional sails, hull, keel and rudder are surrounded by fluid. To describe the buoyancy forces on the sail it is useful to make a few assumptions about the surrounding liquid. In the description of the sails, the following simplifying assumptions are therefore made in flow theory. The fluid is assumed to flow smoothly around the sail or wing. In theory, this means that no energy conversion from kinetic energy to thermal energy due to friction needs to be considered.

Furthermore, the simplification is that the nature of the liquid is homogeneous, i.e. it has the same properties in terms of toughness, density etc. at all points. Another assumption is that the liquid is incompressible. This means that it cannot simply be compressed, but only in accordance with an increase in pressure.

The next assumption concerns the flow model. Here one imagines the wing to be infinitely long, so that in principle one is dealing only with a two-dimensional flow, since the third dimension does not bring any change. In this way, one neglects the end of the wing, around which complicated currents form in reality. However, these turbulences are neither useful nor helpful in describing the lift forces of an airfoil or sail. In wind tunnel tests, the wing is fitted between two vertical end faces, so that the end of the wing is virtually cut off.

The forces acting on a sail or on a body in a liquid have their origin partly in its function as an obstacle, namely that the sail or body interferes with the free flow of the liquid, and partly in the flow conditions on the surface of the sail. In the case of the sail we have learned about both forces, the buoyancy at the sail and the resistance through the sail.

The flow conditions on the surface of the sail are caused by toughness effects. It is this frictional resistance that is necessary for lift to occur. But it is also what makes the mathematical models, which are simple in themselves, complicated.

It is helpful for the understanding to look at simple streamlines around a circular cylinder. Using this model, the relationship between the shape of the sail or wing and the induced speeds, pressures and forces is explained.

A liquid flow can be imagined as a chain of particles, all of which move at the same speed. We speak of a potential flow when we mean stationary flows. For stationary flows, the local flow velocity is constant. Thus the streamline pattern always looks the same. At unsteady flows however, flow changes speed all the time, so streamlines move all the time.

Furthermore, we assume in the case of a potential flow that there is no separation of the flow from the wing. The fluid rejoins directly behind the wing. In reality, on the other hand, we often have to deal with flow separation. However, to describe the principle of lift, this phenomenon can be neglected.

Sails with lift and Bernoulli equation

The Bernoulli equation now establishes a relationship between the speed of the flow and the dynamic pressure of the flow, it says: The sum of static pressure and dynamic pressure is equal to the total pressure, and this is constant. The equation can be derived from the law of conservation of energy. The total energy remains constant, and in our case this is the pressure, static and kinetic. 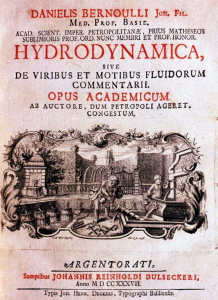 One can compare the static pressure of compressed air with the potential energy of a tensioned spring. Another conclusion from the Bernoulli equation is that with increasing speed the pressure decreases. Emotionally, this does not seem logical, one rather associates high speed with high pressure. However, we must look at it differently: where the speed in a flow decreases, the kinetic energy is transferred into the form of static pressure, which increases at this point. That which is lost in one form of energy rises again in another form.

This means that in an ideal fluid, where no energy is converted into heat by friction, the energy conversion only results in changes in velocity and pressure.

In a real flow, in which a part of the kinetic energy is converted into heat by friction, the total pressure is no longer constant. If, however, the flow is rather slow, as in the situation of a sailboat, and the fluids have a very low viscosity, such as water and air, the Bernoulli equation provides very good approximations, since the proportion of energy converted into heat energy by friction is very small.

In order to understand how the sail works, we look at Prandtl’s boundary layer theory, which brings theory and practice into harmony. This boundary layer also exists closely on the sail and causes turbulences on the sail. Paradoxically, in the theory of smooth fluid, the pressure distribution of a fluid flowing around a rotating cylinder is symmetrical to the vertical and horizontal axis. This means that the liquid does not exert any force on the cylinder.
This paradox was expressed in the fact that one could observe things but not prove them, and that one could prove things that one could not observe. Prandtl solved this apparent contradiction at the beginning of the 20th century by dividing the flow field around a body into two areas. In the area that is close to the body, the liquid is essentially determined by the viscosity. This is called the boundary layer. In the second area, outside the boundary layer, the flow is essentially described by the theory of a smooth fluid. In it, the toughness effects can be neglected.
We again look at a rotating cylinder in a parallel flow. The liquid particles are slowed down at the cylinder wall. This causes the particles to begin to accumulate on the back of the rotating cylinder, they detach themselves from the cylinder. The jam in turn causes the boundary layer to become thicker. This causes the streamlines to be forced away from the cylinder contour.

This is known as detachment of the flow, which results in a turbulent eddy area downstream.

In order to understand the theory of lift on a sail, we next look at another flow process: the circulatory flow or rotational flow. We cannot see a rotational flow on the sail directly, but indirectly as a result of the way the sail works, in the form of vortex currents. Vortex currents appear behind the sail during on-wind courses, and due to toughness effects of the air in the boundary layer of the sail.
By a rotational flow we mean a flow that flows in concentric circles around a cylinder. A rotational flow can be created by rotating a cylinder in a frictional fluid. The frictional force causes the cylinder to drag the fluid elements with it. The boundary layer is so thin that its effect can be neglected.

Flows of this kind are also called vortex flows, and the cylinder is the vortex core. Such currents can be observed in nature in water and in the air.

In nature, for example in tornadoes, we can observe very impressive examples. Inside a tornado, the pressure drops so much that the water vapour in the air begins to condense, hence its white appearance. Behind sailing yachts on on-wind courses, similar vortices are created, which are constantly being formed anew at the expense of constant energy consumption.

Sails and the principle of buoyancy

In order to understand how a sail works, you need some basic knowledge about buoyancy. The technique of the superimposition principle allows a complex flow to be designed as a superimposition of two simpler flow processes. To understand the complex processes of a sail, we look at a simple model to simulate the sail. For this purpose we want to superimpose a pure parallel flow with a pure circulation flow around a circular cylinder.

To obtain the resulting flow pattern, the velocity field, the two local velocity vectors, of the parallel and that of the circulation flow, must be added. The problem is thus solved in the same way as the determination of a resulting force as a vectorial addition of the individual components.

From the Bernoulli equation it follows that the pressure is greater on the upper side than on the lower side. Consequently, the difference in pressure results in a resulting force, which is called lift. This force moves the cylinder upwards, at right angles to the flow. A superposition of parallel flow with circulation flow thus causes a lift. A pure parallel flow around a cylinder, however, does not, the forces remain in balance.

The distribution of roles between top pressure and bottom pressure is also interesting. The vacuum on the upper side of the cylinder makes the main contribution to the lift, while the overpressure on the underside is relatively low.